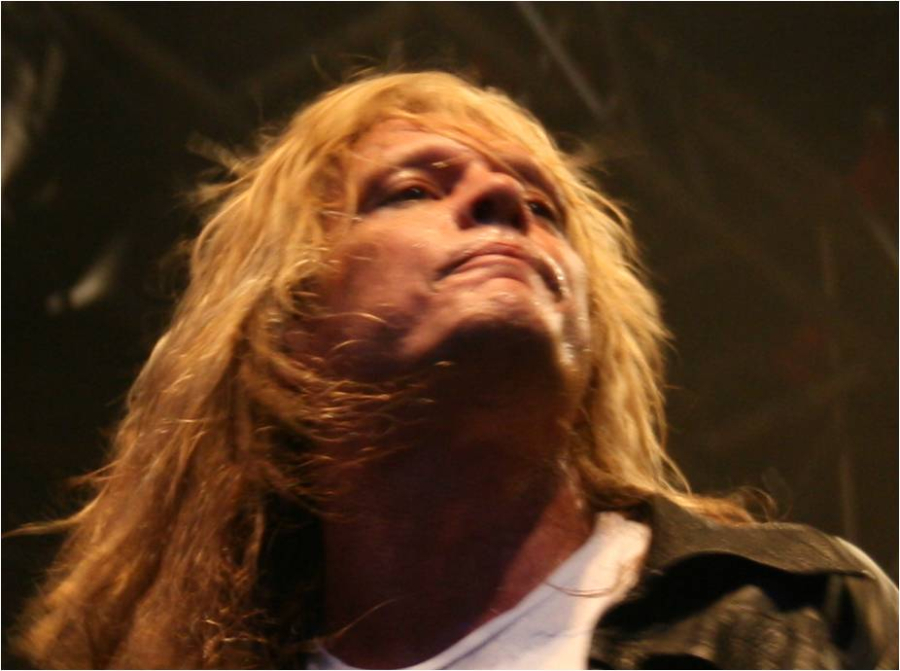 Etter at anmelderen postet en link til omtalen på The Great Southern Brainfarts Facebookside, svarer Bach personlig i kommentarfeltet og kaller forfatteren av artikkelen «asshole» og legger til, «Stay the fuck away from me if you know what’s good for you.» og fortsetter videre med: – «I will tell every band I know to keep you off the fucking list of every show that you ever want to get into.» 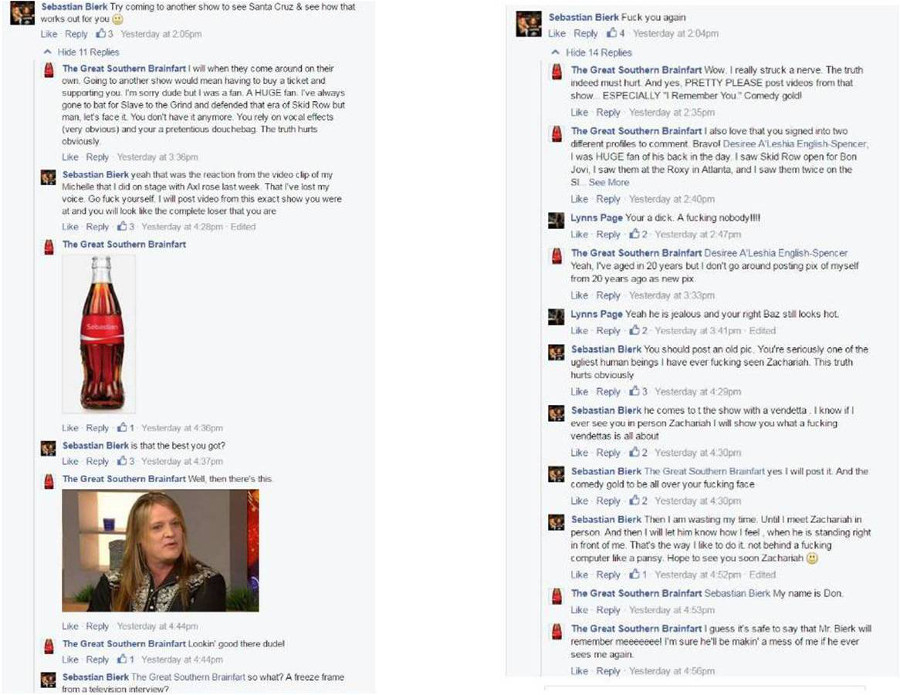 So when my I told my wife that I was going to see Sebastian Bach, the first thing she said was, «I challenge you to start things off by saying five nice things about him before going into it.» Well, I knew that this would be really hard but here goes nothing.

Ok, now that I got all that out of the way, let me just say this show was literally the kind of show where, I mean, let`s face it, this shit just writes itself. The venue was, at most, about 3/4 full which honestly isn`t bad for a Thursday night in the suburbs of Atlanta. The crowd was easily one of the oddest mix of people I have ever seen. I saw some «barely 21» types there, I saw the aging rocker chicks wearing spandex that was working overtime to contain everything inside of them, and I saw the khaki short wearing dads with their Five Finger Death Punch shirts tucked in. This was definitely a diverse crowd for sure. Most were absolutely hammered at this point and waiting for the «Original Voice of Skid Row»  to take the stage.

I waited with open mind for Sebastian Bach to storm the stage and totally kick my face in. What would he open with? «Slave to the Grind»? «Big Guns»? Something else really fucking rocking. Nope. How about opening with an extremely discordant cover of Jimi Hendrix`s «Little Wing» from the Skid Row B-Side Ourselves EP? How was that? Instead of feeling like I was having my ass kicked, it felt more like getting hit with a bag full of cotton candy. «Ok», I thought to myself, «Maybe he`ll bring the rock now!? Nope. Let`s do «Breaking Down» from Subhuman Race. At this point, the audience looked confused and kind of sleepy. Ok, can we rock now Mr Bach? Nope. Let`s do a country song called «Battle With the Bottle» Wow. At this point it was getting painful as Bach`s vocals were so off key that I was waiting for Randy Jackson to come out saying, «Yo dawg, that was a little pitchy.» The applause was so lackluster that Bach pleaded the audience, «Stay with me people!»

After another set of sleepy tracks including a really, again, off key rendition of «18 & Life», the real show stopper was «I Remember You» Not because it was good but because it was such a train wreck. Guitarist Brent Woods evidently thought it would be cool to have his roadie put his electric guitar on him just in time for the intro to go electric. In other words, he did the acoustic part and then his roadie came out and put an electric on him to try and make a cool transition but his acoustic was on a stand and blocking the pedals so he couldn`t get to the pedals to go electric in time and was scurrying like a frantic rat trying to get out of a maze to get to his pedals. We were literally doubled over and laughing hysterically. Then things took a turn for the even funnier when during «Slave to the Grind» the Bachster totally whacked himself in the head while swinging his microphone. I mean, really? This show is absolutely a total amateur hour.  Spinal Tap revisited.

It was really painful to see how this guy who at one time was one of my favorite metal singers in one of my favorite metal bands reduced down to such a circus side show. Even his band for the most part all had this look of disdain on their faces like they were barely happy to be even picking up a pay check from this gig. Besides Bach?s constant display of flat vocals and spirit fingers, the rest of his band left much to be desired. Guitarist Brent Woods (who many rave about how great he is) pretty much slaughtered every lead and did it so badly that during his lead on «Monkey Business» someone next to us literally puked. I mean, I`m sure he puked because he was drunk as shit but it was just funny timing because I actually felt a bit sick myself after that terrible solo. I feel like I could go on for pages about every terrible facet of this performance but I know I have to stop somewhere. Closing out the night with a really terrible cover of AC/DC`s «TNT» was just soured icing on a cake wreck and then it was all over.

You know, as I looked around, this crowd really thought they had seen some sort of amazing performance. I don`t know if it`s that they were all overly drunk, or if maybe they were all just a bunch of suburban soccer moms/dads who were just happy to be out late on a weeknight without the kids, or if they all just have really low standards of music appreciation but they all clearly saw and heard something that I and my friend didn`t. As a matter of fact, this show in particular totally makes me see why Skid Row would never take this guy back. Between his off key singing and his pompous banter of things like, «See people» I`m almost 50 and I`ve still got it. I can only imagine that the Skid Row guys just look at this clown and say, Nope. We`re good. As a long time fan of this guy in my youth, I really wanted to be proven wrong but it was the polar opposite of that. How the mighty have fallen indeed.